Domino's "buy garbage get garbage free" offer, and fun with the Food Pyramid

...because what more could you want with your order of cheap bread, cheese and sauce in the shape of a saucer than another order of cheap bread and cheese- hey, we'll even throw in some dipping sauce!- on the side?
And if the pizza-in-another-form doesn't serve your addiction to processed, fatty, sugary garbage, well, here's some bite-sized chocolate-y goo things- at least, I think that's what it is.  Domino's just refers to it here as "something else."  Which is at least honest- yeah, I can't come up with labels for what are basically leftovers from the pizza creation process repackaged into free* crap Domino's will give you along with your box of warm non-nutrition.  Anything to keep you coming back to this particular Diabetes Promotion Facility instead of Pizza Hut, Taco Bell, McDonald's, Burger King, etc. etc. ETC.
*free if you ignore the billions of dollars in federal subsidies given to the wheat, corn (and corn sugar) and dairy (here's an idea- don't just put cheese ON the pizza!  Put it IN the pizza!  And put it in something called "cheesy bread" and and sell or give that away as a "side."
(I keep remembering a page from my science textbook back in High School which included the "Food Pyramid" which was promoted by the federal government after WWII as a way of propping up Agribusiness.  Even then I thought that the pyramid promoted the consumption of a ridiculous amount of food- 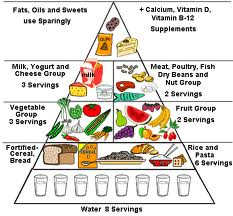 I mean, seriously.  Six servings of rice, pasta, cereal, and/or bread every day?  Three servings of milk, yogurt and/or cheese every day?  Who needs to eat meat twice a day?  And how does one eat cereal six times a day but also "use sweets sparingly?"  Oh, and I also remember this line on the same page:  "Of course, milk should be your drink at every meal."  Um, WHY?  Why would ANYONE need to drink that much MILK?  Not to mention that if people drink three glasses of milk a day, why would they also need to take calcium and Vitamin D supplements?  So Big Pharma was in on this with Big Agriculture?